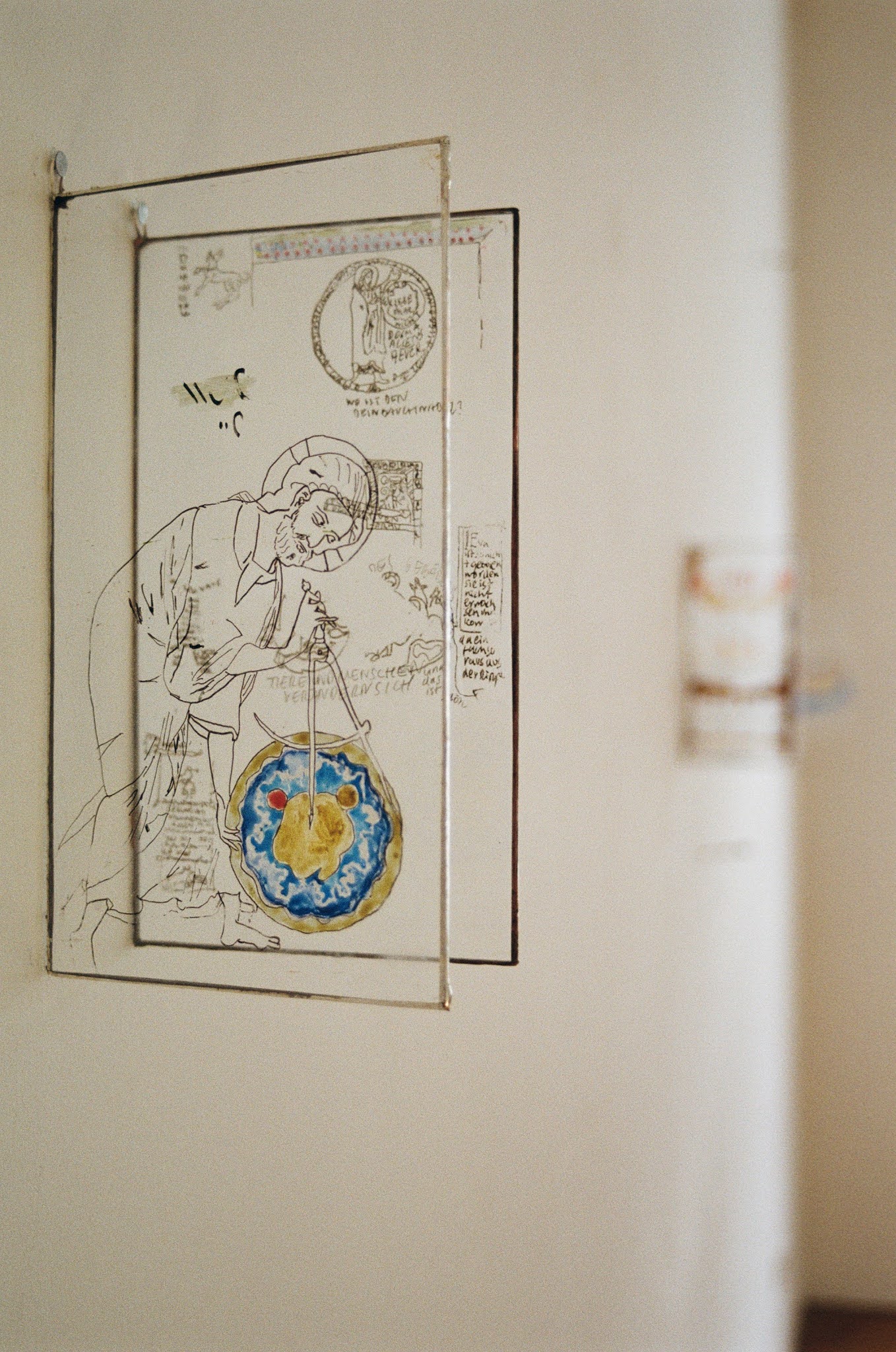 The Creation of the World with a Compass, 2018


Looking at this series of glass paintings, we recognize scenes that depict stories and events as described in the Bible or the Koran, depicted again and again throughout visual history. Although upon a first sight it seems clear what is presented to us, it yet does not really seem to be revealed. In other words: we are used to representations of heaven, hell, of god and specific characters and scenes in religious texts, especially when appearing in order to communicate a specific (affirmative) message. They are part of a subtext, a kind of ‘moral soundtrack’, which has already been completed and is ready for the party so to speak. This clear, predetermined set of songs has been interrupted here, and it is exactly the ambiguity between the known and the altered, which enables us to re-consider Noah, Jonah & co.

Small arrows are arranged to accompany the glass paintings and stir our views: they offer hints, suggest new visual angles, perhaps disrupt straight lines of thought. Their inherent gesture of pointing can be seen under the angle of Peircean indexicality – a pointing towards another object or topic, which remains unknown in this case. (1) This reference towards something else is echoed in one of the paintings itself. In Die Erschaffung der Welt mit einem Zirkel (The Creation of the World with a Compass), god is depicted while shaping the world with a compass. However, it here seems more accurate to look at this painting in a different manner: rather than an active, creating god, he instead seems focused on the tips of the needle, trying to recognize a direction, a hint that is indicated to him.

This image directly references one famous illumination of the so-called Bibles moralisées (the MS 2554 from ca. 1250 that is now at the Österreichische Nationalbibliothek in Vienna) in which, like in a picture book, biblical texts are combined ambitiously, not only with an image (in a medallion), but also with short written moralisations. These manuscript illuminations thus offer paradigmatic examples of how moral messages (both verbally and pictorial) are strategically paired. (2) By looking beyond the globe, by an implied search or re-orientation, the act of creation seems weakened and relativized in the glass painting. This feeling is reinforced by small drawings and scribbles that have been added onto the glass plate, deriving from notes of the artist, which reflect generic stories like the creation, and Adam and Eve. We read fragments such as “animals and humans change”, “where is your bellybutton?”, “Eva was born a grown-up” as well as an incoherent Arabic sentence that humorously draws attention to the limited ways in which religious tales are viewed in the western world. The copper arrows have been gifted

to the artist and in their initial purpose most likely were part of some kind of game. She has modified them by adding a middle part made of ‘cold porcelain’ (‘Kaltporzellan’), a mass formed out of corn flour, oil and glue, which receives a crispy texture when burnt. It appears as if the arrows have ‘swallowed’ different masses of meanings, which have been added onto their initial forms that remind of injection needles – ready to spread their contents and directions. Their material quality enables an easy re-arrangement of the described (gesture of) ‘pointing’, as the arrows can be stuck into different parts of the wall without effort.

This can be seen as yet another type of relativization, standing in opposition to the one-way direction that lies behind religious messages, which are communicated in the medieval book illuminations as well as church windows (3) quoted in this series of glass paintings. The choice of colour, namely ink, which can be wiped away in a second, further emphasises the ephemeral character conveyed in the works – showing a strategy that can be considered a humorous disruption of tradition.

2 Compare to Lowden, John. “The "Bible Moralisée" in the Fifteenth Century and the Challenge of the "Bible Historiale"” in: Journal of the Warburg and Courtauld Institutes, Vol. 68 (2005), pp. 73-136.

3 The stained-glass paintings are framed with soldered copper. 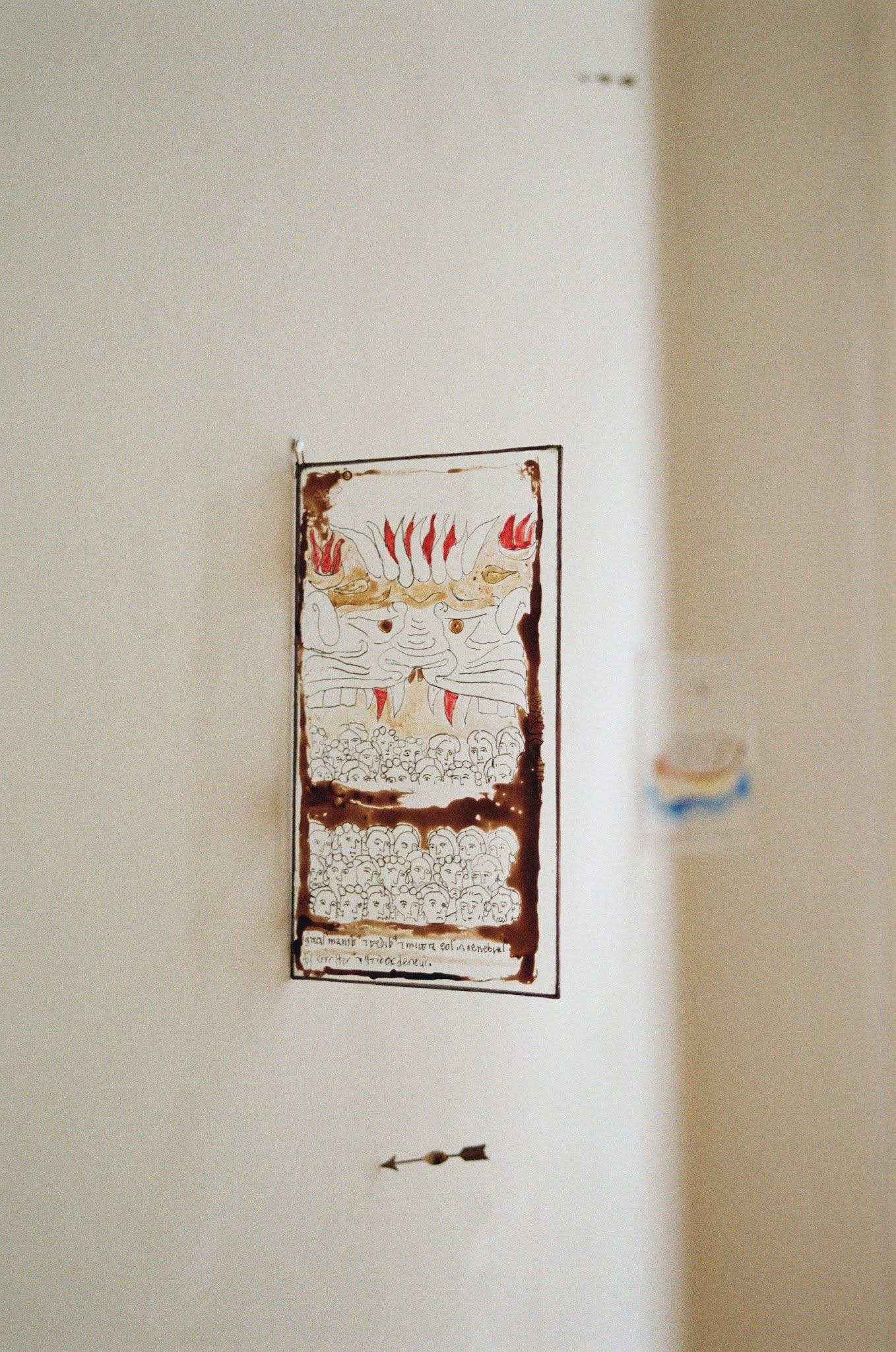 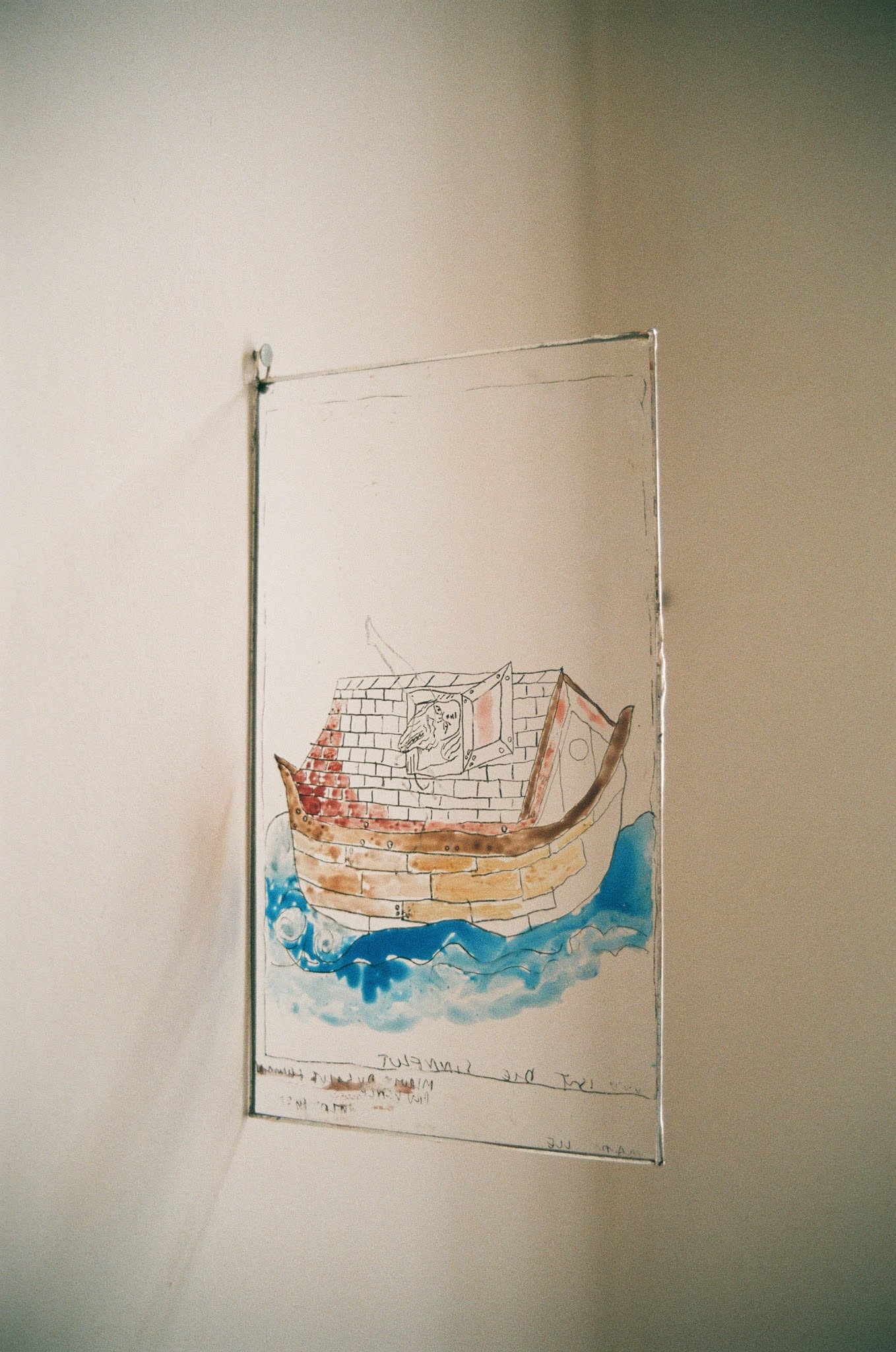 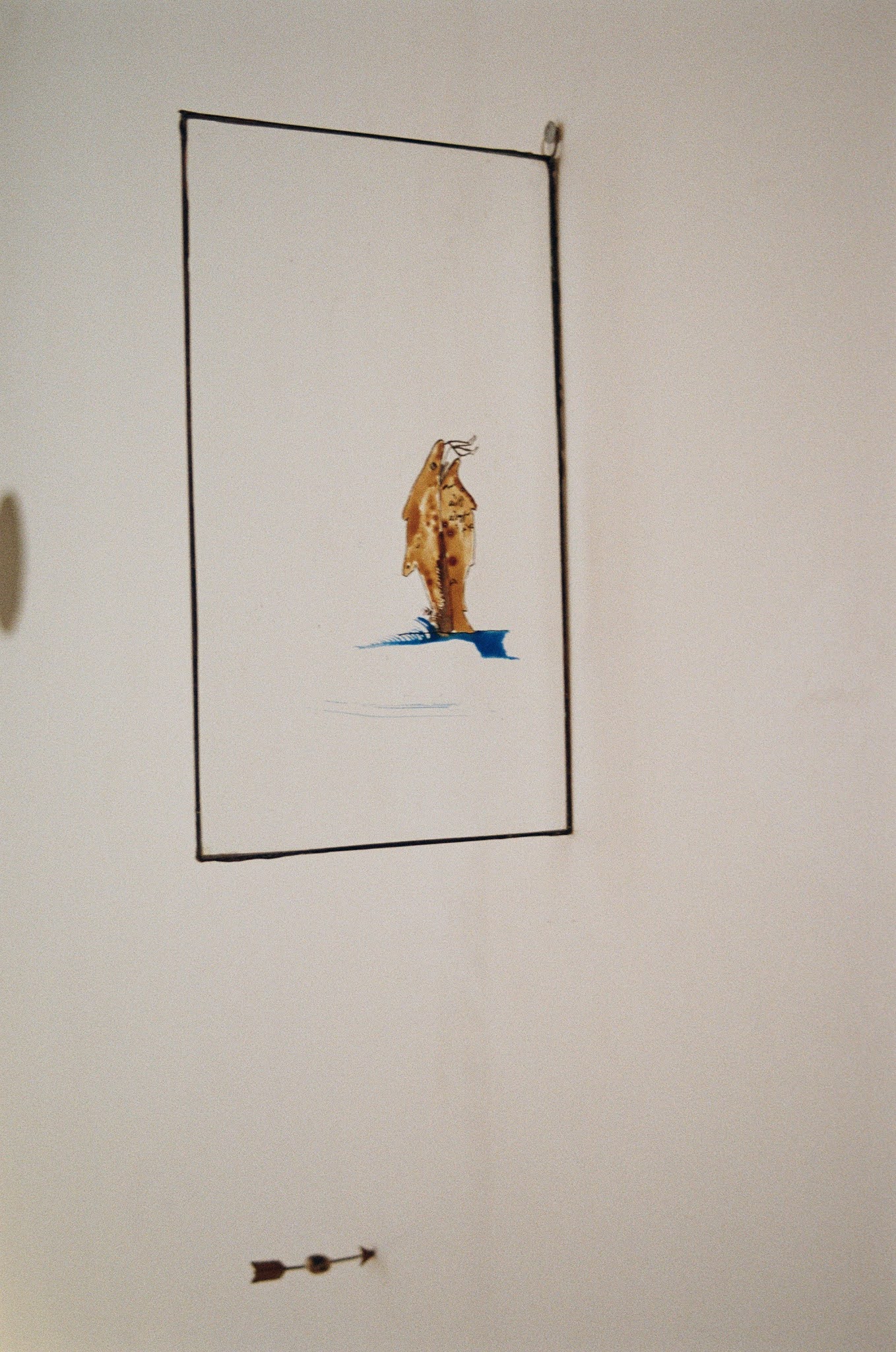 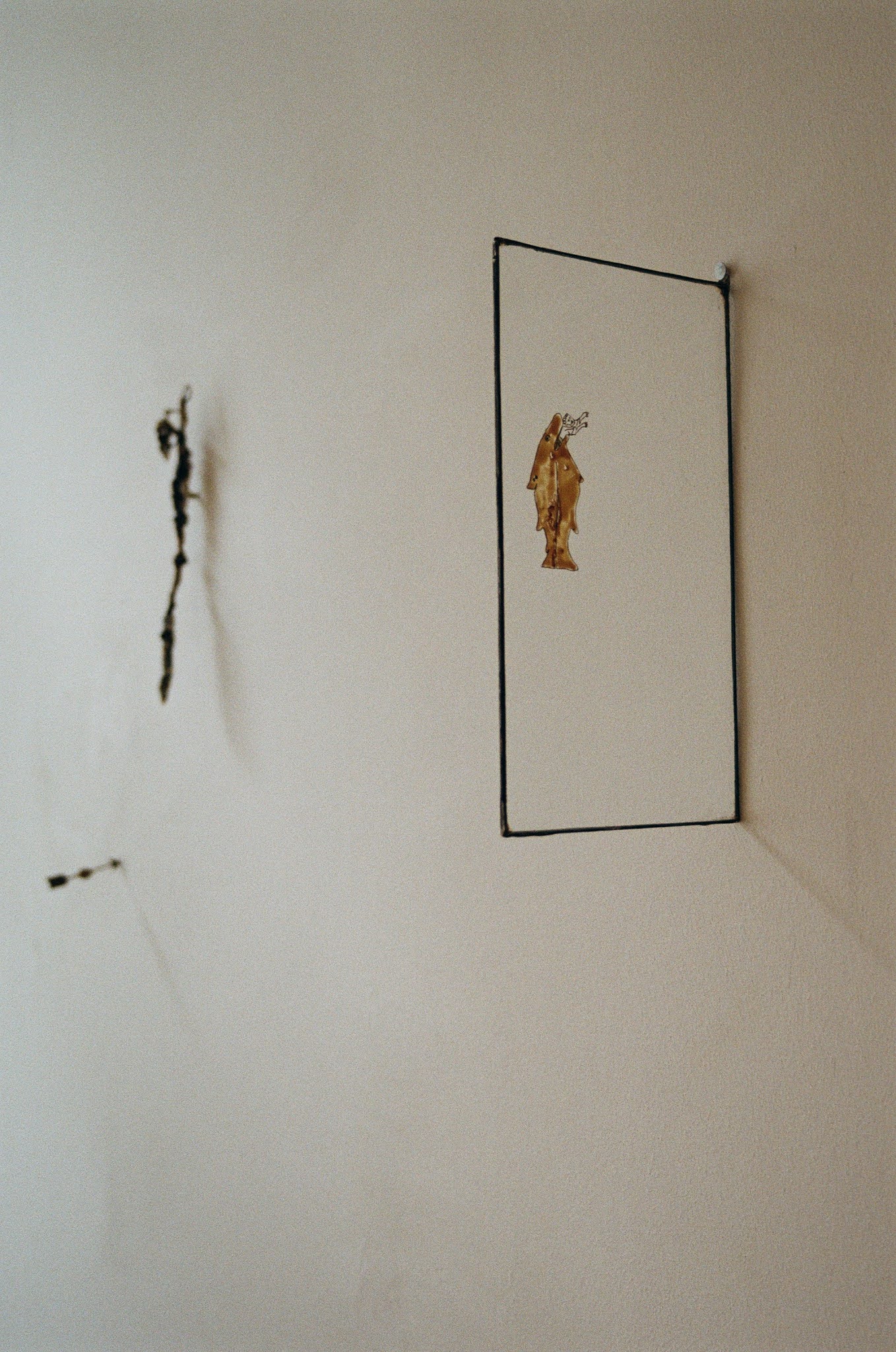 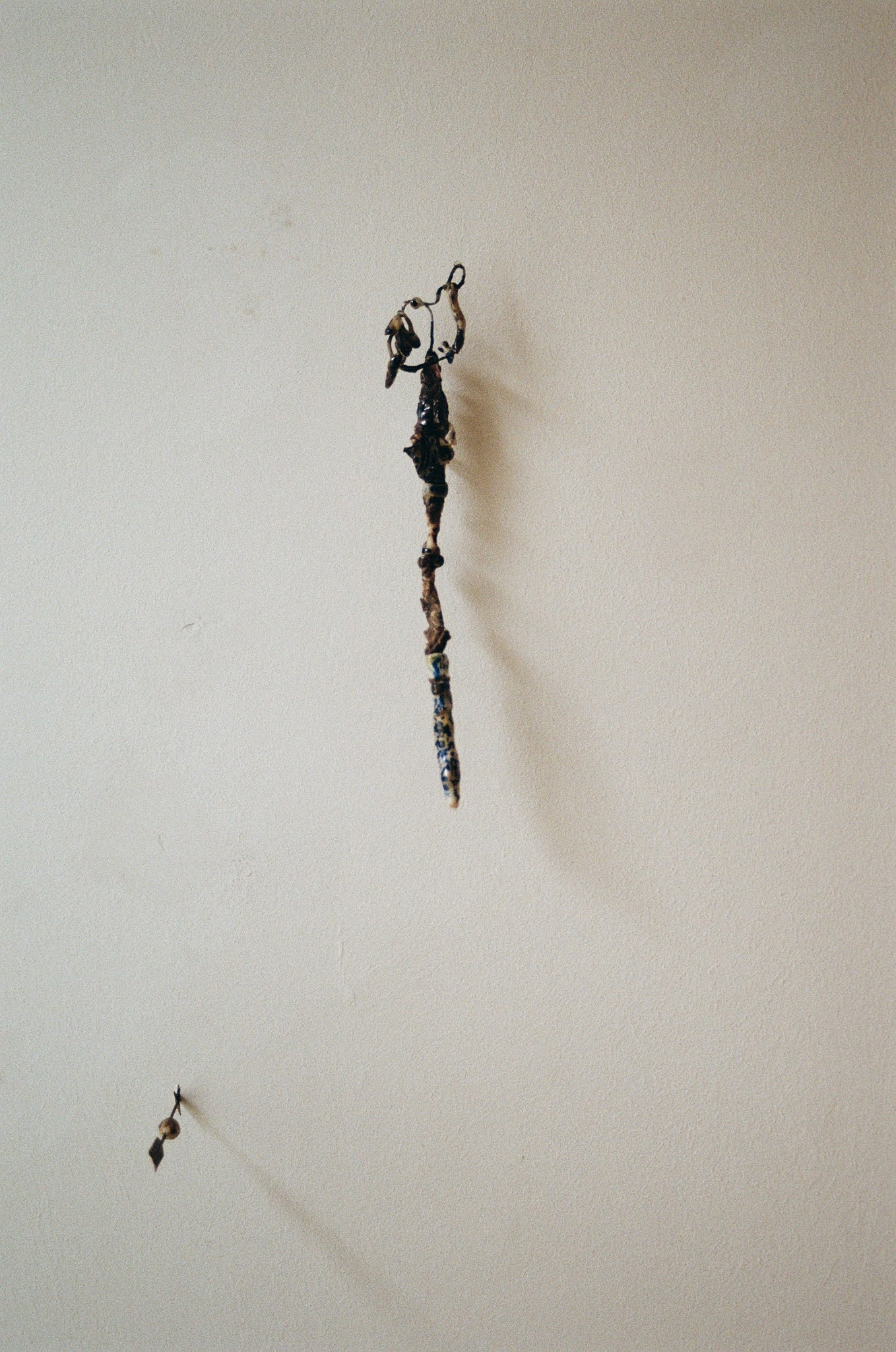 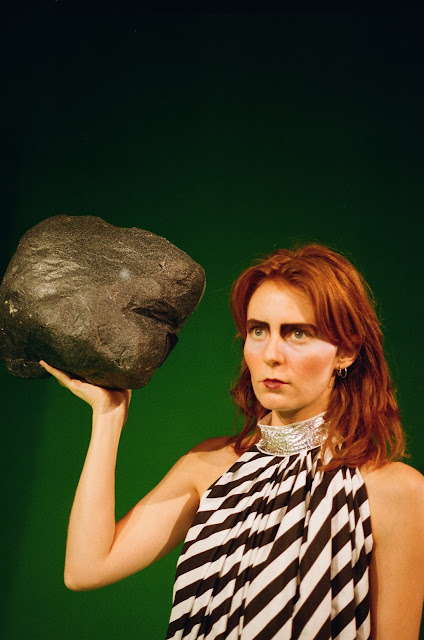 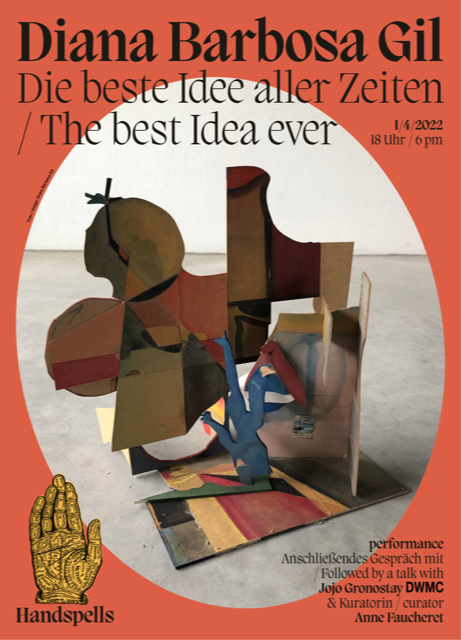